Yuan-Nang (ヤンニャン Yan Nyan) is a strong-willed and courageous female Taoist whose character design is highly influenced by that of Sun Wukong from the Chinese classical story Journey to the West, including a cloud-somersault parody, Ruyi Jingu Bang, and the size-changing headband that was used by the monk Xuánzàng. 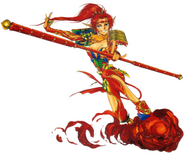 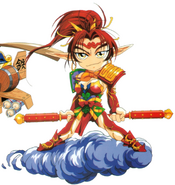 Taisen Net Gimmick: Capcom & Psikyo All Stars
Add a photo to this gallery
Retrieved from "https://psikyo.fandom.com/wiki/Yuan-Nang?oldid=149"
Community content is available under CC-BY-SA unless otherwise noted.