Ash (アッシュ Asshu) is one of the playable characters from Gunbird, a 28-year-old German adventurer inventor who flies by using a jet pack on his back. When two players choose Ash and Marion as cooperative partners, Ash takes an unhealthy love interest in her due to him liking younger women.

In Gunbird 2, Ash appears in Tavia's endings when she is teamed up with Marion or Aine. With Marion, he informs Tavia that her mother is better and wishes for a potion that will make Marion always stay as a 9-year-old girl. With Aine, Ash appears to make Tavia and Aine stop arguing. Aine takes Ash to bed and makes love with him, making him cry and wonder why he showed up.

Ash also appears in Marion's endings from the Sega Saturn version of Sengoku Blade: Sengoku Ace Episode II and as an opponent in Taisen Net Gimmick: Capcom & Psikyo All Stars. 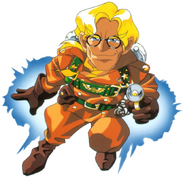 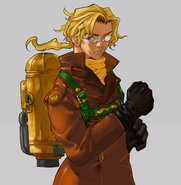 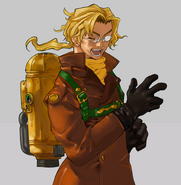 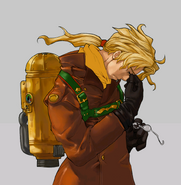 Taisen Net Gimmick: Capcom & Psikyo All Stars
Add a photo to this gallery
Retrieved from "https://psikyo.fandom.com/wiki/Ash?oldid=151"
Community content is available under CC-BY-SA unless otherwise noted.